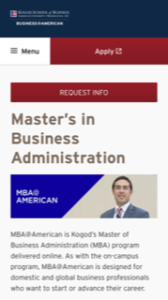 Over the past few months I’ve been collecting emails (92 to date) from 4 online MBA programs sent to me as a potential student. And so 2018 begins with a review of what’s been received from each program. We’ll look at frequency, content, and presentation to puzzle out what each school thinks is most important to a potential student.

In addition to the emails, we’ll also have take a look at the online inquiry form, the speed of mobile websites, and social media sites on Twitter, Facebook, and LinkedIn.

How did I pick these schools? In searching for Link of the Week picks I visit many websites. In these cases I visited the online MBA programs. And I either completed an inquiry form at that first web visit or later, in response to a retargeting ad.

Among a plethora of online MBA programs, none of these are highly listed in the US News Rankings for “The Best Online MBA Programs.” Syracuse appears first, in a tie for 47th place (754 students). American is next in 127th place (131 students). Simmons and University of Dayton programs are not on the current list.

Position on the US News list doesn’t bother me. Each of these are fine schools. On the US News “Best Business Schools” rankings, Syracuse is 88th, the only one among the Top 100 schools (58 full-time students.) American University has 60 full-time students and University of Dayton has 107. Simmons College dropped a 40-year old full-time, onsite MBA program in 2015 after deciding that the enrollment future rested with the success of an online program.

Did Simmons have a crystal ball in 2015? Enrollment in full-time MBA programs at many schools has not been robust in recent years. Last fall even the flagship University of Wisconsin – Madison contemplated ending a full-time, onsite program ranked 34th in the U.S. Alumni reaction was one reason that idea was dropped, but you can sense the direction of a blowing wind. Note the difference between enrollment in the Syracuse full-time program (58) and the online program (754).

The Kogod School of Business at American University sent 23 emails between 16 September and 3 January. October was the highest month, with 10 contacts.

The online MBA program at Dayton sent 33 emails between 17 August and 2 December. August was highest with 10 contacts, closely followed by October with 9 more.

The Google Test My Site mobile speed rating was a “Poor” time of 9 seconds, with an estimated visitor loss of 29 percent.

Simmons MBA sent 11 emails between 5 October and 3 January, with 4 contacts in both October and November.

For the online MBA, The Whitman School of Management at Syracuse sent 25 emails from 16 September through December. Eight emails arrived in both September and October.

Over the next few weeks…

Expect a review of the email content from each online MBA program first, followed by comparative notes on the online inquiry forms, and indiviual notes on how the schools seem to be using social media.

That’s All for Now

Subscribe to “Your Higher Education Marketing Newsletter” for monthly marketing new and notes and weekly Link of the Week selections.