Fast, Easy-to-Complete Online Admissions Application from The University of the Pacific 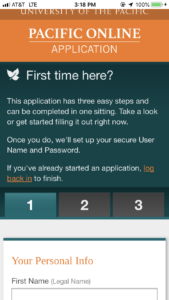 How many of your admissions applications are completed on a smartphone? Might more people do that if it were easier to complete?

The University of the Pacific first reported on the success of an online admissions application for new freshmen at the AMA Symposium for the Marketing of Higher Education in 2010. Back in those ancient times almost nobody in the room thought that it was possible to put an admissions application online and make it easy to complete. Until they heard that the university had received 10 percent of 2010 freshman application via mobile phone.

Revisiting the online freshman admissions application in 2019 shows that it still ranks better than most similar efforts.

Scroll through the pages on mobile or large-screen device and you’ll immediately see that the text block headings are very easy to read. Spacing between the blocks adds to the feeling that this application was created with a visitor-friendly experience in mind.

Google in March made major changes to the “Test My Site” tool. Among other points, speed is now rated using a 4G standard rather than the 3G level that Google told us until March 70 percent of people are still using to access mobile sites. Comparison with past Link of the Week mobile speed reports isn’t valid. Speed expectations are higher now than in the 3G world.

The University of the Pacific is the first site we’ve tested under the new system to get a “fast” rating for a mobile download of less than a second.

Competitive comparison… Google now gives you the ability to add up to 9 URLs from competitor sites for comparative speed ratings. Do that. If the result shows that your site is slower than your key competitors that might give you new internal leverage to increase attention and resources to the need for a faster website. How does your admissions app on mobile compare to the 0.8 seconds of the University of the Pacific version? If you’re also under 1 second, tell us here with a link.