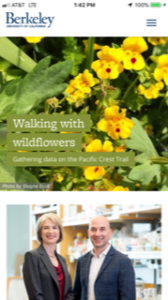 Search for “university website rankings” and you’ll find an array of results based on a variety of criteria.

Last week Convince & Convert released a 2nd annual listing of its rating of the top 25 websites selected from 50 schools with the highest enrollments in the U.S.: “The 2019 Best Websites Among America’s Top Universities.” Most are public universities. 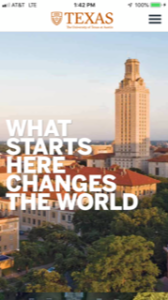 Consider the home page opening here: a “Walking with wildflowers” invitation to learn more about “Gathering data on the Pacific Coast Trail.” Just below that you’ll find an easy-to-scan array of 6 university stories and 3 events upcoming in June. At the end of the page there’s a special feature on the performance of Berkeley athletes at the 2012 Summer Olympics. Overall, more of a traditional public relations focus.

No special logo graphic. No slogan. A Berkeley name wordmark, it seems, is all it takes.

University of Texas at Austin

You can’t miss the opening promotional message “What Starts Here Changes the World.” That’s a strong claim. Content on the rest of the home page is designed to support the claim. UT at Austin, we are told, is a “University of the First Class” and several topics and relevant stats are used to illustrate that, with links to more information about each:

The home page closes with an exhortation to “Be a Leader. Be a Longhorn” and 4 student recruitment links to undergrad programs, costs, visits, and campus life at “Texas’ premier University.”

Like Berkeley, there no special logo design graphic. A wordmark will suffice.

Google in March made major changes to the “Test My Site” tool. Among other points, speed is now rated using a 4G standard rather than the 3G level that Google told us until March 70 percent of people are still using to access mobile sites. Comparison with past Link of the Week mobile speed reports isn’t valid. Speed expectations are higher now than in the 3G world.

The UC Berkeley home page time of 3.2 seconds matches most other colleges and universities tested for another “slow” rating. The overall site speed is 1.7 seconds and that still gets a “slow” sticker.

UT at Austin home page is faster with a 2.9 second “slow” rating and an overall site speed of 1.2 seconds that’s also considered “slow” by Google.

Competitive comparison… Google now gives you the ability to add up to 9 URLs from competitor sites for comparative speed ratings. Do that. If the result shows that your site is slower than your key competitors that might give you new internal leverage to increase attention and resources to the need for a faster website.

The marketing free (in the usual sense) University of California Berkeley home page.

The marketing oriented University of Texas at Austin home page.