SUNY (State University of New York) has 64 campuses from community colleges to research universities. Each new chancellor pledges to achieve national recognition of “SUNY” as a premier university system. And each chancellor leaves without having achieved that status. In reality, SUNY is rather like a medieval kingdom in Europe where fiefdoms of varying status and strength pledge allegiance to a “Chancellor” in the capital city while maintaining as independent a marketplace position as possible.

That’s evident by the brand claims and positioning statements put forth by the 4 major research universities. Overall, none make great use of the SUNY affiliation to build brand respect. What do we see as their home pages open on mobile and desktop devices and after a Google search for each school? (For overall SUNY brand statements, see “What is a Brand“) 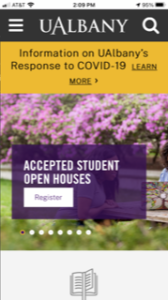 You can’t miss the link with SUNY in this response… the SUNY affiliation is equal to the name of the university. The brand claim is modest among this group. This is, after all, the only “public research university” in the Capital region. And so it doesn’t hurt to add that “premier” word to the mix.

Visitors who enter the website via desktop will find the SUNY affiliation noted in small letters underneath the “University at Albany” name.

Visitors who enter via mobile will only see the “UAlbany” heading until they scroll down to the bottom through several sections. In the last panel the SUNY affiliation again appears underneath “University at Albany.” 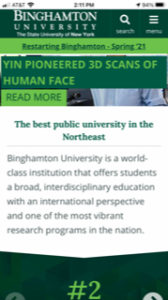 No immediate connection to the SUNY system appears, although any one who scans the usual questions that appear after the initial search result will see several SUNY references. Binghamton claims a higher status than Albany as the #1 public research university in the entire state. No immediate sign of who made the ranking.

Visit the home page via desktop and you’ll see that the best in New York status claim has been expanded to “The best public university in the Northeast” without mention of the research attribute. The State University of New York affiliation appears underneath the university name at the top of the page in a font size that’s large enough for reasonable visibility.

Visit via mobile and the state affiliation is visible at the top of the page underneath Binghamton University. “The best public university in the Northeast” stands out here as well as it did on the desktop version.

Again, no immediate connection to SUNY appears in the primary heading. Buffalo is the only one of the four that adds an “affordability” claim to the first heading people will see. Doe that “true” word imply that other claims to “affordability” might be fraudulent? Guess we’d just have to compare to find out. What is “affordable” to one person or family is of course not necessarily affordable to another.

Buffalo obviously clashes here with Binghamton re which university is the top research place in New York. But there’s nothing new in conflicting brand claims.

Desktop visitors will see a “UB” logo followed by the name and then, in pretty small letters, the State University of New York affiliation acknowledged. The claim to the top spot in New York isn’t repeated anywhere on the home page.

Mobile visitors? They’ll again see the logo and nameplate and then the SUNY note in true squint level font size. 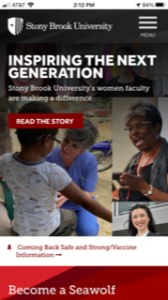 Stony Brook takes a different path here, identifying with “New York” without a mention of SUNY itself.  Skipping the contest over which school is best in the state of New York, Stony Brook settles for an “internationally recognized” status that some might say elevates it beyond the state. It’s the only place that claimed it was “changing the world” although given the usual hyperbole in higher education we suspect that the other three schools would admit to the same prowess if asked. (While “recognition” doesn’t depend on ranking status, we do note that none of these universities is ranked in the top 100 international universities by US News or by Times Higher Education World University Rankings.)

Desktop visitors will see the State University of New York connection in quite small type under the name of the university as the home page opens. Just below an opening feature story is a large heading for potential students: “Want to change the great big world?” indeed repeats and reinforces a main theme in the Google search results. Smart marketing to do that although we’d have placed it in top priority content position on the page.

The first mobile view shows the name of the university right away, but not the SUNY affiliation. And again, when you scroll down just a bit past the opening story you’ll see “Want to change the great big world?” Scroll down the page to an image that includes a campus sign… that’s the only place you’ll see “State University of New York” connected to Stony Brook.

On both desktop and mobile you can follow a “Ranking Among World’s Best” link to see that the Physics and Astronomy program is ranked 87th among 100 world programs. Validation for that “internationally recognized” claim.

See how 4 SUNY research universities maintain their distinctiveness and acknowledge their SUNY connection on their home pages when you follow the Links(s) of the Week:

Recommend a future Link of the Week

Always eager to get recommendations of websites that dare to be different… or just do something ordinary in a special way. Write a comment with link here or send me the link at bob@bobjohnsonconsulting.com